Bio Clean can help you with crime scene cleanup and restoration in Everett, Olympia WA, Renton, Seattle, Tacoma or Washington. They are a biohazard remediation and disaster response company and will help you in your time of need. 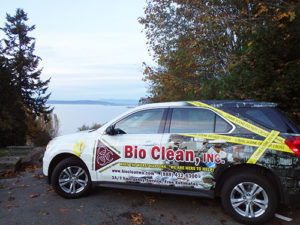 A crime scene is by its nature disturbing, horrific and traumatic. The last thing you should be tasked with is the cleaning and sanitizing. Apart from the associated emotion and trauma, you should not in any way touch or disturb a crime scene. Once the law enforcement has released the scene, you should call the professionals.

There are strict rules and guidelines that cover biohazard remediation, especially crime scene cleanup. A professional cleaning and remediation crew where protective clothing and gear. This is because a crime scene will involve blood and bodily fluid cleanup and remediation.  In addition an unattended scene will have other complications such as decay, presence of insects, rodents, fecal matter, urine and a whole host of awful stuff.

Apart from protective clothing, a professional cleaning crew will use specialised equipment and chemicals to clean, disinfect and sanitize a crime scene. They also follow strict protocols as laid down by bodies and organizations such as OSHSA and the CDC.

A crime scene could still harbor important evidence. This might be evidence overlooked by first responders, detectives and law enforcement. A biohazard response team is trained to spot potential evidence. If they find such evidence, they will document it and hand it over to law enforcement.

The job of a crime scene cleanup crew is to restore your property to pre-incident condition. They do this is a discreet, compassionate and professional manner. Once they have completed their work you can return to your home or place of work and rebuild and carry on with your life.